While these are usually two sides of the same coin, I try to make praise my 'go-to' side. As most kids, Turbo learns the best through praise, praise and more praise.  Lately, I've started creating opportunity for that praise.  Here's an example.

Turbo had been taking off his diaper during nap, then playing and finally peeing in his bed. This went on for weeks, almost everyday. I was never mad about it. I just spoke to him several times about not taking off his diaper (blah, blah, blah), then washed the sheets. I tried putting his diaper on backwards and that worked for a week. Then I decided to potty train. I didn't know what else to do and didn't think he should be punished for removing his diaper.  Turbo got sick and we had to postpone the training. With Rick out of town and company coming, we now couldn't do it until Dec or Jan. So, I came up with a different approach - Create an opportunity for him to "do" what I wanted and praise him for it.

I decided to 'catch' him with his diaper on. I put him down for his nap and went back in after 10 minutes (since he was still playing). His diaper was off, but no pee. I made a big, happy deal about there not being any pee in his bed, put his diaper/clothes on reminded him to keep his diaper on then laid him back down. He continued playing. I went in after another 10 minutes. His diaper was on! To say I made a big deal would be an understatement. I looked like a lunatic - cheering, jumping, hooting, hollering, spinning, shouting "YEA Turbo", picking him up and swinging him around. All because he left his diaper on.  You should have seen his face. He was beaming with pride, smiling ear to ear and cheering along with me.  I set out to catch him in the act of doing what I wanted. It's a small change in tactic, but one that's really working for us.

Guess what, every day since then he's left his diaper on. Every single day. The first thing he says when I get him is "YEA! I left diaper on!!" every time. And I praise him for it.

The words we use with our children live in their hearts and minds. They genuinely want to please us and live for our acceptance and approval. Sometimes catching them in the act of being good is the best motivator.

I have a lot to learn about being a good parent, picking the right battles and making the right choices for correction. Some days I do better than others. Typically I'm at my worst when I'm tired and we're in a new place where I'm distracted. He's curious and wants to find/test the limits of the new location and I'm trying to keep up with him, manage Sweet Pea and talk/shop whatever.  I just need to avoid that situation when I'm too tired to handle things correctly. (what, I'm NOT superwoman? LOL~Nope!)  So, it's nice to have a strategy that work and builds up my son, his confidence, his security and our relationship.

I was inspired to write this by a post at Tired, Need Sleep. She's reading The Minds of Boys and wrote up some tid-bits on Love and Learning. It's interesting to see how the two are tied together. She has a great blog, so check out her other posts while you're there.
Posted by Susan at 7:26 AM

Email ThisBlogThis!Share to TwitterShare to FacebookShare to Pinterest
Labels: parenting

I LOVE this approach! Sometimes it can be so hard to remember to point out the good things instead of bad/wrong things. Thank you for reminding me to do this. I think it is definitely effective.

OK - so I know dogs and kids are different... but it's the only comparison I have. But ever since I changed over to clicker training (positive reinforcement) with the critters, it's been wonderful. It becomes really cool when you finally get to where you've changed your own personality and look for the positives rather than the flaws. I know some good sources on operant conditioning (yes, it does work with humans as well as dolphins and dogs) if you're ever interested. :)

Lovely blog and wonderful post! I've added your blog to my reader!
Hope you'll come by and visit me too!

Lovely blog and wonderful post! I've added your blog to my reader!
Hope you'll come by and visit me too!

Susan
I'm a wife to a terrific husband and stay at home mom to two kids (2007 & 2009). I believe play is the best tool for learning experiences and teaching moments. It tends to be the journey or the process of an experience, not the final outcome, that makes the biggest impact in their minds. My goal is to make these early years All About the Journey and not the hurried outcome. Join me while I write about our learning activities and more. 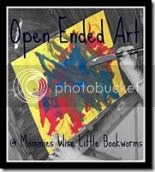 What is Tot School?

For our family, it is dedicated time with Turbo where we focus on learning through FUN and Productive Play! I typically have a theme for the week and certain skills for our focus. Most days we spend about 30 minutes on Tot School - typically divided into two sessions.

Why? The free play all day was not working for us. Turbo would get antsy and start looking for something more challenging or different. Usually that meant playing in something he wasn't allowed or he would be very demanding of my attention every minute. The TotSchool concept has really worked for us. We both love the togetherness and learning. Plus, he's happier with some self-directed play later.

How to do it? 1+1+1=1 has put together an awesome site with a wealth of ideas for getting started. There are so many wonderful blogs with terrific ideas! Just jump in and get started. It's tons of fun and both you and your tot will learn a lot. Also, feel free to email me with questions.